Another Work From Home (WFH) Update 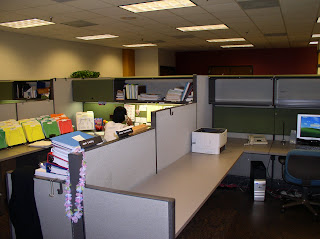 In this picture Kristie Cantrell is sitting next to her empty cubicle in the space she now shares with Jack Leichty. The two started today working on alternating days in the office and working from home the rest of the work week. The big move was Friday but has been in the works for weeks. Note that both their name plates are now affixed on the same cubicle wall. To make sure that two people could work from the same space, we required that Kristie's former space be completely emptied, wiped down, and that it not be used for storage. Both of them now have 100% of the materials they need for their immediate work area in one cubicle, or at their home offices.

This was no small feat. Since neither uses a laptop IT moved both of them from their desktop PCs to a virtual desktop on the company server. That requires software that's in its evaluation stage and will expire in two weeks. After that, a second 60-day software evaluation will run the virtual desktops and buy us time to make a decision as to if this software is an appropriate purchase. We moved one under-counter filing cabinet into the newly shared cubicle; otherwise the fixturing is the same.

Last Thursday we had another virtual staff meeting; the first to feature three staff members joining via video and the first to include Tom Davies, our HR Director in Plano, Texas. The video was perfect while the audio was distorted and distracting. Next meeting we're going to hook everyone up via conference call using the telephone for audio and Oovoo just for the video. We'll report back on how that works.

In a related project, we've begun going through all our file drawers, file by file, and purging/shredding/archiving whatever isn't needed for daily operations. In two weeks our goal is to move all our files into one file room, move Amy Lindsey into Kristie's vacated cubicle, and move Payroll into an empty space next to the file room. With some help from Facilities, our goal is to empty eight cubicles in one block to make way for new neighbors, whenever that need arises. The starting point for this move, however, was the extra cube made available by WFH.

We have always resisted close neighbors in the office given the confidential nature of what we do in HR. What we've discovered, however, is that our use of Pandion Instant Messenger (IM) to communicate with each other while working from home has translated into IM use with each other while in the office. Also, the digitization of much of our files and the purge I mentioned above will open up more work and meeting space in our file areas. The verbal communication in the department has decreased to the point that we're confident that we can communicate with each other without being overheard even by those over the wall in the next row of cubicles.

So what's the critical learning, the next step, and the future of the WFH test?

1. Cubicle sharing is possible now - Any two people in the test who have a laptop and a two-line capable desk phone could move in together. This requires a change in scheduling, but not much of a change in fixturing or anything else. Sharing desktop PC resources is still a few weeks off, but if the test shows a positive cost-benefit then I believe its coming.

2. Nothing Beats a Good Purge - Its worth your time (and space charges) to look in those files nobody ever opens, in those old documents and you haven't seen in years, or to archive off-site (with a two or three year destroy date) those documents that you "might" need "someday". They don't have to be in the desk drawer at your fingertips if they're "just in case" files.

4. Open Every Drawer - Those 2002 files were in a cabinet I thought was being used for payroll, until payroll said that wasn't their cabinet. How many of these do we have company-wide at $17/sq. ft.?

5. Use IM - This minimizes the chatter in your office, drastically reduces your email load (and therefore email server space requirements), and increases communication speed both for those at the office and those at home.

6. Set up a Meeting Area with Web cams and Oovoo - Some areas in the test are "just" using no-meeting Fridays as WFH days, and that won't lead to space sharing. To truly test the WFH concept people need to be working at least two days from home a week. In order to have meetings as-scheduled and test WFH requires that meetings will often include those joining via web cam. We use my office, and we have a shared departmental laptop with a camera that we can use in shared conference rooms when my office isn't available.

Michael Hyatt said…
I love this experiment. I also love that you are reporting on it. Very cool.
5:54 AM

Popular posts from this blog

April 22, 2014
One of the little-talked-about benefits of the Affordable Care Act's Insurance Marketplace is that people who lose their health coverage during the year become eligible to sign-up.  The same COBRA qualifying events that make you eligible to elect COBRA also make you eligible for mid-year sign ups on state or federal Exchanges.  Employers can charge you 102% of the full premium for your existing coverage, and generally employees pay about 1/3 to 1/2 of the full premium.  COBRA premiums, then, are sure to be anywhere from double to triple what you normally pay. Exchange coverage will be 100% of the full premium.  The coverage pool is also larger than most employers.  Chances are your premiums will be the same or less than COBRA coverage.  However depending upon your income you could be eligible for a subsidy which could make the coverage less expensive.  Another advantage is that if you did not elect a certain coverage as an employee you cannot elect it under COBRA.  Exchange cove
Read more

February 27, 2015
Since July of 2014 the Department of Labor has been soliciting public comments on proposed rule changes to the Family and Medical Leave Act (FMLA) regarding same-sex and common-law marriages.  It recently announced that the Final Rules have been written and will become effective March 27th, 2015. Those rules replace interim guidance that had been in place for some time since the Supreme Court's striking down the Defense of Marriage Act (DOMA). First you might ask why this was necessary.  Some will of course say that this is part of the federal government's push under a liberal administration to redefine marriage.  That is hardly the rationale.  Currently 37 states and 18 foreign countries recognize same-sex marriages, but the FMLA is a federal law that applies in all US states and governed territories.  The potential for confusion was significant. More and more young couples are cohabitating and raising families outside of a traditional marriage. The FMLA, were it not to con
Read more

I Feel LIke I Owe It To Someone: A Blog Reboot

August 17, 2016
A dear friend of mine used to keep a cartoon taped to his office window. One dog was talking to another saying, "I used to blog, but then I just went back to howling at the moon."  In May of 2015 I posted on this site that I was taking a break from blogging.  You can find that easily so I won't repeat it.  At that time I had not posted in almost a year, so now two years have gone by without original content. I felt, and feel, that the risks of a social media misstep must be outweighed by some greater purpose.  Without that, like the dog in the cartoon, all you do is risk your job and reputation howling at the moon.  In the last few weeks I believe I have found that purpose.  A former colleague contacted me asking for my help in his job search. I counseled with him and casually mentioned afterward on LinkedIn that I would do the same for any former Nelson colleague still in transition and would never charge.  Then I had a family member decide to change careers, then re
Read more