Showing posts from August, 2007
Show all

How We Know All Employees Are Legal

I have for some time wondered how long it would take the political demagoguery of the immigration issue to manifest itself as racist behavior in everyday people. The immigration debate in this year's local elections can best be described as putting the modifier "illegal" in front of a host of nouns (immigrant, foreigner, etc...) in order to mask mistrust and disapproval of foreign nationals in public forums. Leadership is communication, and with this type of local leadership we've been bound to get what happened this past week. We had a caller from outside the company reach one of my young staff members to question her as to how we screened for "illegals". When pressed for specifics, he mentioned one of our Hispanic employees by name and said that he "knew" she was illegal because she was on his list. He claimed to have a list of illegal immigrants working for our company, that he was with "the neighborhood watch" and that he would be &qu
1 comment
Read more

We Interrupt The Business Life for Real Life 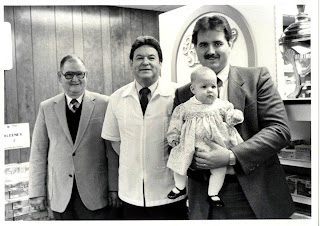 At 2:15 a.m. on Saturday the phone rang, and it was my Dad telling me that my Grandfather was gravely ill in the Critical Care unit of the Regional Medical Center in Madisonville, KY. Having just celebrated his 90th birthday with us two weeks before, Ed Thomason had suffered a series of mini-strokes from which he recovered within 30 minutes to 3 hours each time; but had this time suffered a significant stroke from which the doctors did not expect him to recover. His nurse called my dad since he lived two hours away, and he gave me a heads-up that the situation was grave. At 4:45 a.m. the phone rang again; Dad was in Madisonville by that time and was calling in the family. Luther Edward Thomason departed this world at 8:15 a.m. with all of his descendants who could be reached holding hands around his bedside. This included his wife Louise, 88, to whom he had been married for 73 years and their only son, my dad, who turned 70 earlier this year. Such ended the earthly life not of one
4 comments
Read more

August 02, 2007
Work was once much simpler than it is now. Your home life happened at home, your work life happened at work, and your social life happened everywhere else. The boundaries were easier to define: work happened at set hours and at a work site, and when you left the workplace you left your work. All of us working in knowledge work occupations know that this has changed dramatically. I'd be 10 years behind the times if I claimed that this was a new observation. But as we change our company culture and move towards more flexible work arrangements, what is a new observation for me is that the workforce that wants these arrangements is often its own impediment to change. I had to deal with a department this week that turned on one of its own, who was coming back from maternity leave on a flexible schedule to accommodate child care. The sniping about "full-time pay for part-time work" when the person was delivering their work assignments well and on time was troubling. I
1 comment
Read more
More posts